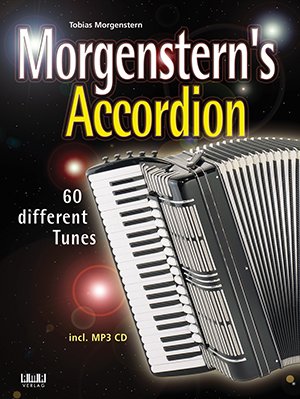 Tobias Morgenstern, whose chamber music compositions for accordion (such as "Trio" for oboe, guitar and accordion, NM1309) published at Verlag Neue Musik, has released a playing book with pieces for accordion named "Morgenstern's Accordion" and the AMA Verlag.

After studying at the Academy of Music "Franz Liszt" in Weimar, he has worked as a freelance accordionist, composer, arranger, producer and studio musician. His concert tours have taken him to Italy, Czech Republic, Poland, Switzerland, USA and Canada. As a founding member of the band "L'art de Passage" and the Brazilian band "Sanfoneiro nordestino" he has been the artistic director of the "Theater on the edge" in Oderbruch since 1998. In addition to his apprenticeship for improvisation and accordion at the Hochschule für Musik "Hanns Eisler" in Berlin, he has been a juror since 2003 at the International Accordion Competition Klingenthal. Through his countless musical experiences, Tobias Morgenstern is an artist who can arouse emotions of all art-dimensions and beyond. Thus, stars like Gerhard Schöne, Bettine Wegner, Reinhard Mey, Rio Reiser, Andreas Dresen, Wenzel, Winnie Böwe or Barbara Thalheim rely on his skills.

His new work "Morgenstern's Accordion" is a collection of 60 pieces that connect the philosophy of the composer and musician and reflects on different styles of modern music. The compositions contain musicals styles from classical, country, folk music, tango, jazz, Latin and pop. Yet his compositions are designed so that the sounds and rhythms, that sound easy on other instruments like the guitar, can be easily adapted on the accordion. For this purpose, he has changed phrases and rhythms, which are then played in a way which mixes well with other instruments.

Therefore Morgenstern's compositions are pervaded by different chord combinations in the bass in which he exploits the untapped sonic resources of the instrument. So in most cases, the rhythms and groove are played in both hands, he deals with a strict division in tune, treble and the bass in most pieces. These compositions are intended for advanced musicians, but are given little assistance for the interpretation of the pieces. They also contain little fingering, they are found as recommendations in the bass notation. With the MP3 CD with play-backs that give a recommendation on the interpretation of the pieces, players get an easy access to the pieces and the opportunity to expand their repertoire.

10 Little Waltz for A

27 In Praise of Music

38 Flowers on the Table

51 Mornings in the Mountain Lodge

52 Late Evenings in the Mountain Lodge

57 On the Road to Opelousas