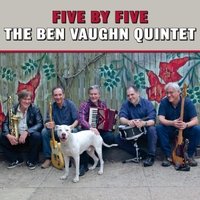 I love coming back east to play with the Quintet. No thinking is required when we get together. The music just rolls out. As far as I know, we’ve never performed the same set twice. If we did it would be totally by accident.
This collection was recorded at our soundman Frank Silva’s studio in Sewell, New Jersey, next to a horse farm. We cut it live with a few overdubs tacked on at the end. It was an easy session with no hiccups. Actually, we did have one difficult moment – deciding which takeout joint to order from. We were in the middle of South Jersey and Gus is a vegan. Next time he’ll pack a lunch.

Anyway, enough about food. I hope you enjoy the record. We certainly enjoyed making it.