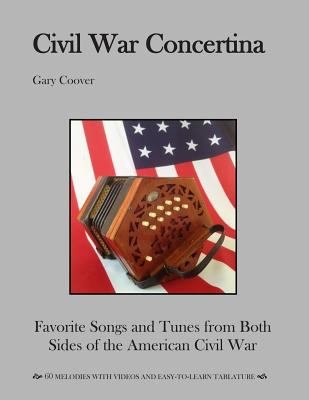 This book presents 60 songs and tunes from the American Civil War that were favorites with the soldiers and those at home, arranged especially for the 20-button C/G Anglo concertina.Inside are patriotic airs, marching songs, soldier songs, sentimental ballads and minstrel show songs adapted from the original sheet music, including popular works by Stephen C. Foster, George F. Root, Henry Clay Work and many others. All songs and tunes include the melody in standard musical notation along with complete lyrics and chords so you can play them on any musical instrument. For those who play the 20-button Anglo concertina, every selection includes an Anglo concertina tablature system that makes it easy to learn and play simple and complex arrangements. The music is arranged for concertina in a variety of styles – single note, simple harmony, octaves, and full accompaniment. All 60 tunes also have a QR code that links to a YouTube video so you can hear and see exactly how each printed arrangement is played.Although the 20-button Anglo only has one row of buttons in the key of C and another row in the key of G, it is far less limited than you might think, and you will be surprised just how much music you can make with it and how so many of these wartime melodies seem to fit perfectly.This book will take you back a hundred and fifty years so you can experience the songs and music of the rallies, the camps, the battlefields and the homes.
Favorite Songs and Tunes from Both Sides of the American Civil War.
60 Melodies with videos and easy-to-learn tablature.